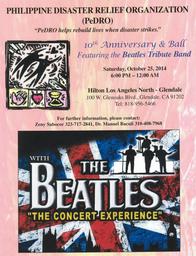 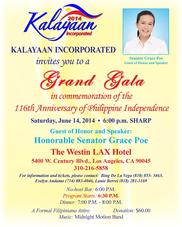 In the commemoration of the 116th Anniversary of the Philippine Independence, PeDRO supports its program and activities. Members of PeDRO are actively involve in the community activities particularly the Kalayaan activities in Los Angeles, California. Kalayaan Incorporated 2014 Chairman-President, Mr. Bing De La Vega is also the President of PeDRO.

PeDRO In Action at the "Typhoon Glenda Disaster Victims" In Luisiana, Laguna

There were 400 individuals benefited from PeDRO in action at the distribution of relief goods in Luisiana, Laguna that was recently hit by the typhoon "Glenda." The team was headed by Dr. Manuel Baculi and Mrs. Myrna Baculi. Mr. Bing De La Vega, the Chairman of PeDRO, and some family members of the Baculis were also at the site helping the relief distributions. PeDRO donated $2,000 to be used mainly to buy goods such as rice, canned goods, and other useful relief items for the typhoon victims.

Philippine Disaster Relief Organization (PeDRO) will be celebrating its 10th year anniversary on December 4, 2014. As part of the fundraiser campaign, PeDRO will hold a dinner show on October 25, 2014 featuring the "Beatles Tribute Band" at Hilton Los Angeles North Glendale. Tickets will be sold at $60 per person.

The theme for this fundraiser "PeDRO helps rebuild lives when disaster strikes" in our dedication to those victims of the recent disaster in the Philippines. 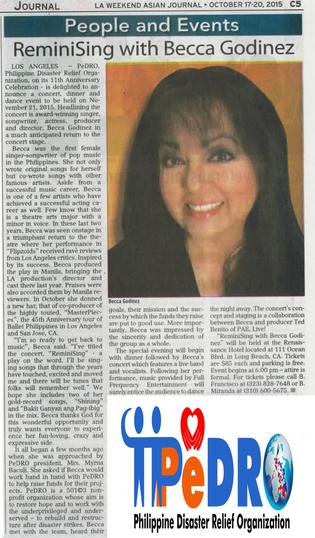 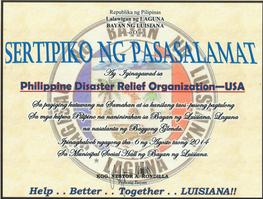 ​A Glimpse About Our History

Mabuhay! The Philippine Disaster Relief Organizstion (PeDRO) was formed in Los Angeles, California in 2004 as a result of the call from the Philippine Consulate General seeking help and donations for the victims of typhoons that wrecked havoc in Quezon Province in December of that year.

The Filipino-American community in Los Angeles responded positively to this appeal. Our efforts together helped raise $42,000 dollars towards the cause and we collected various relief items which filled up a 40-foot container that aided the people affected by the natural disaster

In June 2005, due to the successful relief efforts, a decision was made to formally organize the Philippine Disaster Relief Organization (PeDRO); permanently for future relief efforts of the disaster prone country like the Philippines. PeDRO is a Non-Profit Charity with 501(c)(3) tax exempt status.

The formation of this group has been a historic milestone in the Filipino-American community in California as this is the first time that such a community-wide relief effort was mounted.

The members of PeDRO are all volunteers, dedicated and committed individuals who believe in marshalling the resources of the Filipino-American community for a worthy cause such as extending assistance to the homeland in times of need.

The broad goal of PeDRO includes creating a network of other groups, reaching out to the grassroots that involve Filipino-Americans in their individual and collective capacities and abilities in social and charitable endeavors such as this.

One's participation does not necessarily call for giving funds or providing of in-kind donations but most importantly it is the time of lending a hand as volunteers whenever necessary. For the future projects, our group plans to undertake the role in raising funds for the relief purposes of disaster victims and spreading of the word for everyone to come together especially during critical times.