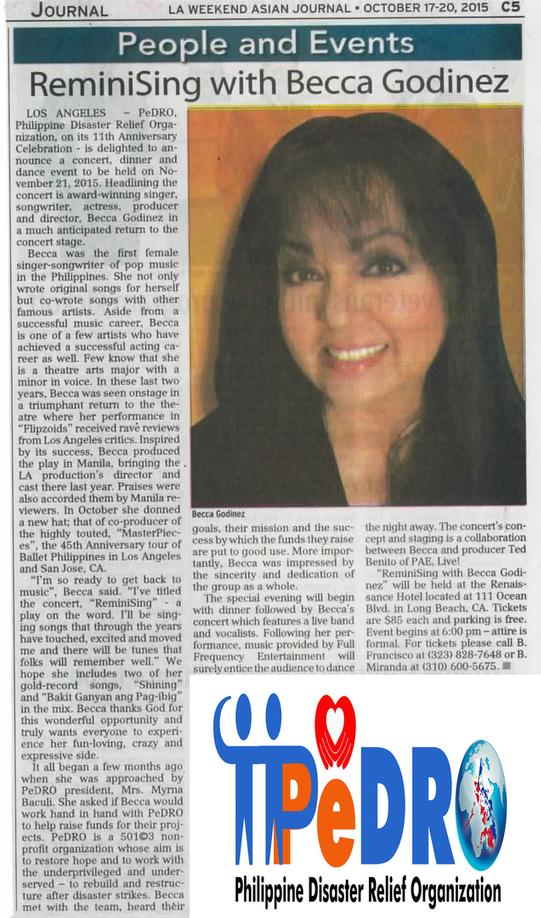 Never mind if the TV has only one channel, very grainy and definitely not HD, and I had a small rattan chair, but when I sat on it, it swayed to being useless. Wi-Fi though was working and so were the mosquitos that had a feeding frenzy with my legs, with sting stronger than an ant's bite."

PeDRO members Dr. Manuel Baculi and wife Myrna; Bing, Jojo, and Lee; Joey and Techie; Archerie and Edith; and Zeny and Serry prepared the boxes for shipment from a storage in Torrance, California.

The 5k Walk for PeDRO last November 10 (Philippine News, November 15-21 2013), had a mission to lend support locally and internationally to Filipinos afflicted by calamities and natural disasters. Its goal was to raise $10,000 to help earthquake victims in the island of Bohol, Cebu, and northern Mindanao. However, donations from those who couldn't make it to the walkathon tripled its earnings to $30,000.

"PAL foundation headed by Menchu A. Sarmiento," said De La Vega, "absorbed the cost through its PAL express for passengers or relief workers, both foreign and domestic, including those traveling with relief items from Manila to either Cebu or Tacloban and did not charge them for extra cargoes destined for the victims. That program was terminated December 31, while the overall emergency relief period ended January 31."

They were met at the terminal, according to De La Vega, by Fr. Kim Neri, Dr. Clara Rosa, and DFA administrator Doy Abrillo, along with Taclobanons returning to their relatives to spend New Year's. They were quite emotional during our flight, faces glued to the windows, anticipating landing at their city that Haiyan had destroyed.

De La Vega said that although "conveyor belts at the terminal were not running as the rubbers covering them were all torn away, it was still very orderly. Boxes were loaded on a mid-size utility truck, and hauled straight to the Chancery.

"The damaged church has been converted as a relief operations center, the action center of the CBCP-NASSA (Catholic Bishops' Conference of the Philippines National Secretariat for Social Action) operations. The building houses food for distribution daily, releasing items upon request from each parish.

"Overwhelmed by the volume of donated medications, including many vials of antibiotic Amoxicillin and bandages," said the PeDRO president, "someone yelled out, 'o, pwede na kayong magka-sakit, may gamut na tayo' to laughter and applause by all." The archdiocese will send notices to all the parishes about the availability of over-the-counter medications, supervised by Dr. Rosa.

"Medical mission is still lacking," Dr. Rosa told De La Vega. "One should be done soon or in the next month or so," she added. De La Vega told them he will suggest that the Philippine Medical Association of Southern California, through Dr. Manuel Baculi, include Palo in its medical missions.

"There appears to be no meaningful repairs with the general landscape (not yet)," added De La Vega. "Large cement electrical posts were all downed with endless lines of wires on the ground; horrific stories from DFA staff enduring dead bodies in front of their office, left on the streets for five days, so they just covered them with corrugated aluminum sheets. Accordingly, the fish market is not doing very well as locals are still reluctant to eat locally caught ones."

"Our hotel room is OK - clean, water good, although elevators were inoperable, but they were adorned with potted plants.